Welcome to Issue 7 of Popular Crypto, a newsletter about the mainstream products and services taking crypto to the masses.

In this issue, we discuss:

Plus our recent interview with the team behind the Coldcard hardware wallet, our latest giveaway and one of the wallets featured below.

All that and more in this week’s issue. But first, here’s some…

And now, let’s see what the cryptocurrency world has brought us this week.

😍 Thanks To Our Sponsor: Nexo.io

Nexo is the only lender offering INSTANT crypto credit lines, which let you use digital assets as collateral to get cash in 45 fiat currencies and stablecoins.

(And Nexo has a big announcement related to credit lines: annual interest rates for credit lines are now starting at just 5.9% – which may very well be the lowest borrowing rate in the whole industry).

Nexo is also a strategic partner of exchanges, OTC desks, and crypto funds through its portfolio of structured financial products. Institutional counterparties can earn up to 8% annually on their idle stablecoins, enter into asset swap agreements, or directly borrow crypto.

Individuals can also park their cash and stablecoins at Nexo’s Interest-Earning account to get an annual return of 8%. What’s more – interest is paid out daily and you can add or withdraw funds at ANY time.

So if you are looking to borrow, lend, or swap digital assets, Nexo is your GO-TO PARTNER. Definitely explore nexo.io or reach them on institutions@nexo.io

We recently caught up with the team behind the Coldcard hardware wallet, which just happens to be our latest giveaway.

Q: How Did You Get Involved In The Cryptocurrency Space?

Coldcard: The Coldcard Team has been in this space since the very early days. It is the same team that created the first Bitcoin Debit Cards (Coinkite.com) and the first scaled BIP32 wallet and Opendime.

Q: Why Did You Start Coldcard? What Was The Main Problem You Were Trying To Solve?

Coldcard: We created Coldcard because the currently available options were either Open Source but not secure or Closed source, and neither were truly Air-Gapped. We have extensive Hardware experience and knew we could make something much more secure and still remain Open Source. Watch our CEO talk about Coldcard Mk3 at Baltic Honeybadger 2019.

Q: What Was The Hardest Part About Building Coldcard?

Q: Who’s The Ideal Customer/User Of This Product?

Coldcard: Bitcoiners who care about Security and Privacy, those are the two most important goals we have with this device. Here is a great Livera podcast with Rodolfo about Coldcard.

Q: How Much Does The Product Cost?

Q: What About Your Product Does The Market Seem To Be Most Excited About?

Coldcard: Our users love some of these unique features:

Q: Does Coldcard Work Well Alongside Other Products?

Coldcard: You can use Coldcard with other Hardware Wallets for multisig!

Q: How Is The Product Manufactured?

Coldcard: The product is made here in Canada. We design and control all the steps for quality and security locally.

Q: How Do You See Your Product Evolving Over The Next 5-10 Years?

Coldcard: We are now at the 3rd version, and intend on improving it further. We also plan on making an HSM firmware version where users would be able to have a secondary Coldcard for automated co-signing multisig transactions.

Q: Any Exciting Product Developments Or Partnerships You’d Like To Tell Us About?

Coldcard: Sure thing. Here’s what we’re most excited about . . .

In our last poll, we asked you about your favorite personal Bitcoin/crypto hardware node. Here are the results:

This week, we want to know about your favorite mobile crypto wallet.

We’ll publish the results next week. See you then!

If you need a An Enterprise-Grade Crypto Market Data API For Your Fund, Smart Contract, or App then consider trying out the Nomics API. Our API enables programmatic access to clean, normalized, and gapless primary source trade data across a number of cryptocurrency exchanges.

Instead of having to integrate with multiple exchange APIs of varying quality, you can get everything through one screaming fast fire hose. If you found that you or your developer have to spend too much time cleaning up and maintaining datasets, instead of identifying opportunities, or if you’re tired of interpolated data and want raw primary source trades delivered simply and consistently with top-notch support and SLAs, then check us out at NomicsAPI.com.

Get my free API Key! 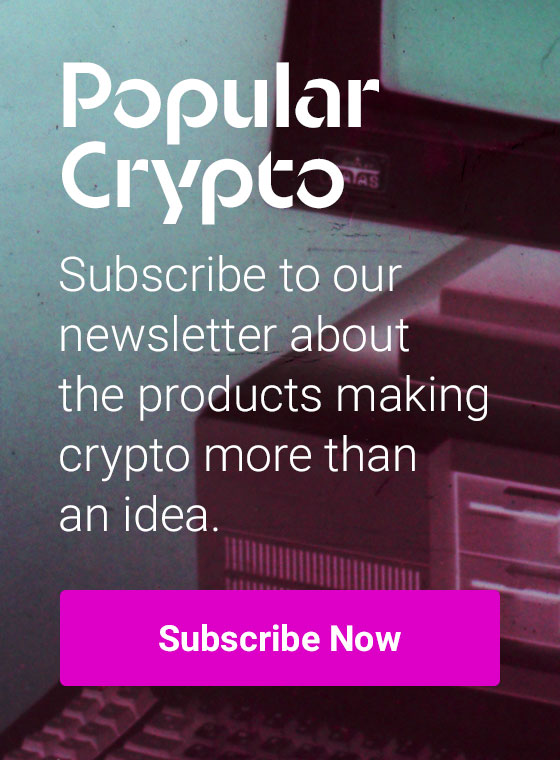